Buddhist Mausoleum and the area surrounding the Stupa 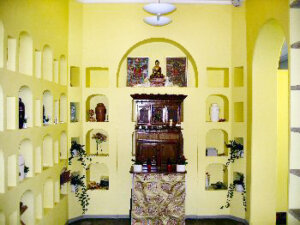 A special Buddhist mausoleum has been set up at Bispebjerg Cemetery, which can be used by all Buddhists in Denmark. The relatives of the deceased will be given a key so that they can come and sit quietly, meditate and reflect near their loved one’s urn.

The door to the mausoleum is always locked however visitors can pick up a key at the cemetery office by the main gate during opening hours. 9-14.

When one is given a key, please note that one can only visit between 9-16, because the alarm is connected at other times and if one trigger’s the alarm it will cost DKK 500, because the security guards will automatically be called out.

Smoking in the rooms is strictly prohibited.

Only use small amounts of incense  because the ventilation is poor. The mausoleum is cleaned and cared for by the cemetery staff. However, you are expected to take litter with you and leave the room clean, ready for the next visitor. There is a small broom and dustpan under the altar. The room is simply furnished. At one end you can see the new altar, which was purchased and erected in 2007. 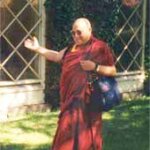 Namse Rinpoche was in Denmark visiting Karmapa Trust Sangye Tashi Ling in 1997 and 2000.
During his visit in 2000 he was also at Bispebjerg
Cemetery to visit the Mausoleum.

The decor of the mausoleum

Since the creation of the mausoleum, a small number of volunteers have supported and paid for the decor. However there are always things which need to be renewed and procured so it would be greatly appreciated if you would like to make a donation. 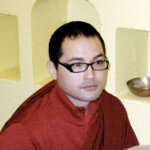 On the left you see a picture of Khunu Rinpoche, who visited the mausoleum on September 23, 2007.
Also present were lama Ani Ea, Brian Zinck and Ole Nordstrøm along with approx. 15 others.
Brian explained the use of the mausoleum and the ongoing plans. 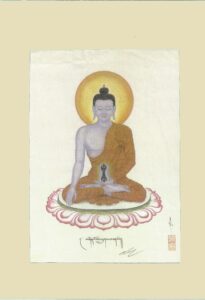 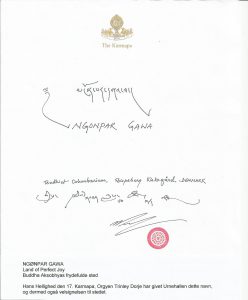